Found a bug? Report it here.

BOB DOES NOT CARE is currently in development, transitioning from Gamemaker Studio to Godot. You can follow updates on twitter.

You should care about BOB, but he certainly does not care about you.
BOB was trapped in a SCI-FI science lab, by sentiment-powered robots to study its careless behaviour. BOB did not care.
One day BOB leaves the lab, just as a form of distraction. Chased by hearth broken robots he carelessly slaughters them using some prototype weapon that are scattered in chest around the lab. Not caring about the proper utilisation of those weapons, BOB just improvised some powerful moves, killing as many robot as he can with a single shot, and then leaves the weapon behind.

You have the possibility of experiencing some level as BOB, in the careless quest to leave the lab.
Control BOB in a series of hand-crafted levels. Find a prototype weapon in a chest. Kill as many robots as you humanly can. BOB uses the weapons only once. Try not to get shot by robot-laser. Repeat.

If you prefer using a KEYBOARD:
WASD - Movement around the lab
ARROW KEYS - Use the weapon in the direction of the key
SPACE - Dash

Or a CONTROLLER:
LEFT STICK - Movement around the lab
RIGHT STICK or ABXY - Use the weapon in the direction of the button pressed
R1 - Dash

Credit to RDz for the soundtrack

Great game. If this game was released on steam or the switch E shop, I would not be surprised. 10/10

MAma MIA this game is tough but so good like cuphead

Apparently if you cause enough lag in the game you can glitch through walls.

also when you pause then move to teleport

I'd love it so the camera would move ahead of the character, I often was killed by enemies off-screen. Also, enemy projectiles are too fast, in my opinion. Great concept and game though, especially for a jam game!

I have an AZERTY keyboard so I can't play !

Use a ps4, xbox one, or two nintendo switch joy-cons with bluetooth

We are planning to target multiple control schemes in the full release. In the meantime you can play with a gamepad :)

Wonderful game! Its really fun n challenging yet not impossible

I like this! It feels fast and responsive, the art and sound are great, but the screen size is a bit small. I was often killed by enemies I couldn't see. The weapon display box can be a little intrusive as well. Overall great game, hope this does well.

Neat concept. Really nice, consistent art design. The level design is a bit simplistic - it's got a strong arcade feel to it (compared to the mission-based structure seen in something like hotline). In terms of gameplay, keeping stuff simple and avoiding RPG-style elements is a smart move. What i'm seeing here is too fast paced for that. If, however, you decide to build in that direction, go for more of a "downwell" direction with them. Great stuff. More enemy/weapon variety, environmental hazards would make for appropriate focus areas for new content. In terms of enemy design - adjusting the attack telegraphy and range of enemies is the right way to go about smoothing out your difficulty curve. I would love to see this, fully realized, on steam/mobile.

Reply
The GDWC3 years ago

Really cool game! I really liked the concept and the music got me hyped. The game itself was quite challenging but it was so much fun to play, overall an enjoyable experience :D

I don't know if you've heard of Game Development World Championship before (gdwc2019) but it's a competition for indie game developers where they can submit their games and it's free! It's great if you want some more visibility for the game and it only takes a couple of minutes to join :)

The game doesn't work for me. I can move and dash but when I hit a chest, I fire a weapon that then disappears.

1. I can't reproduce the bug you reported. If you have a controller connected try disconnecting it if you want to play with the keyboard instead.

2. ("Start") is displayed if the game detects a controller connected to your PC, otherwise the restart button is ("R").

Thanks for the feedback

1) The bug happens when playing with gamepad too.

Loved the game my friend such a great game in 2 days, just awesome. just one thing i would like to know are you using A* for the calculation of enemy paths or any other algorithm. congrats on your game music is so good,just loved all the aspects.

Thanks for the kind comment. For the enemy path calculation we are using a slightly modified version of the A* algorithm.

nice bro. Congrats to your team.

feel free to check out my game https://toastbound-studios.itch.io/neontrail

This game is AWESOME!!!! The only thing I would change is to make the camera focus in front of you instead of where you were so that you can see the enemies coming. Great style, great concept, I thought I would let you know even if BOB DOES NOT CARE!

We also made a game where you play as the Only Juan, a Jelly Knight who can absorb colored bullets from enemies to gain their properties and shoot them back! You can play here and please rate here

I'm really loving this, even though i stink at it

Go on, you can stink at it but BOB DOES NOT CARE :)

Pretty cool game ! It is indeed challenging but I wouldn't call it frustrating, I think it is pretty fair on the player,

that being said, if you take the project further, you should probably zoom out the camera, being killed by an ennemy which just appeared in the screen leads to the player being forced to memorize the level and ennemy location rather than adapting to the situation, and to me, the second option is when this game shines the most

Oh thanks!
We didn't realize that, we will definitely fix it.

I like the game quite a bit, but I also find it frustratingly difficult. Only one life is just kind of overkill in my opinion

Yeah, it was tought to be difficult (we took inspiration from games like hotline miami) but with some time and alot of tries I'm sure everyone can beat it.

And keep in mind BOB DOES NOT CARE, even if it is difficoult ;)

difficult yes, but it pushes the player to master the game and establish interesting strategies on the fly (like destroying a swarm of ennemies following you when you get a laser), and this probably wouldn't happen if the game was any easier

I really enjoyed this game, and the feel of it. Would love to see you take this further.

Some feedback: I would maybe slow things down a bit. I found myself not realizing what was going on every-so-often. Also, once I ran out of weapons, I was basically stuck in the level. Maybe have the weapons replenish after a while?

Thanks for the feedback!

At least I (the designer) am planning to take this further. The game surely needs some polishing so we are definally gonna take in consideration your suggestions.

Exept BOB, BOB DOES NOT CARE.

i wouldnt do that , the fact that they dont replenish forces you to think of it in a puzzle style almost 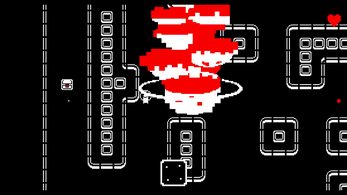 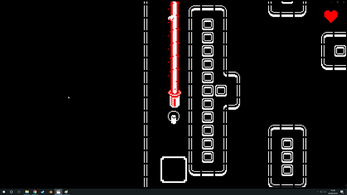